This contest is now closed. Thank you to everyone who entered, and especially to everyone who commented on the banned books. It's nice to know so many people believe completely banning books is wrong. All of those who commented will be entered in the constest for a second entry. I will then post the winner on my blog. Good luck to all!! And happy reading. 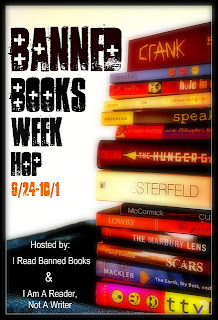 In celebration of Banned Books Week I'm joining several other blogs to giveaway a book that has been banned at some point or another, or to bring awareness to these books, as there are some missed gems among them. Enter below to win a copy of Flowers in the Attic. The contest runs until midnight, Oct. 1, 2011.

My Banned Book of Choice: Flowers in the Attic by VC Andrews
Synopsis: After the death of her loving husband and doting father of her children, Corinne Dollanganger takes her four children home to live with her parents. Unfortunately, one of the conditions of their living there is that the children must be hidden from Corinne’s father who doesn’t know of their existence. Corrine stands to inherit her father’s vast fortune but only if there are no children from her first marriage. Why? Because her husband was her half-uncle, half-brother to her father. Her extremely religious parents believe she is a sinner as she lived in incest.

The children, Chris, 14, Cathy, 12, and the twins Cory and Carrie, 5, are unaware of this. They are locked in the attic where they are sadistically treated by their grandmother: constantly called “the devil’s spawn” and “abominations”, whipped, starved, Cathy’s hair coated in tar, and poisoned, among other cruelties. Their mother, who at first visits with gifts and promises to get them out of there at the first chance possible, soon stops coming to visit at all. Not long after, the twins get ill, and it’s discovered by Chris that their mother has been poisoning them. She has remarried, and needs the children to disappear so as to not interrupt her idyllic new life.

As they are locked up with no one else to interact with, they soon make up their own family unit, with Chris and Cathy acting as parents to the twins. As Chris and Cathy go through puberty in their three-and-a-half year confinement, Chris and Cathy become attracted to one another. After the death of Cory due to the poisoning, they decide they must escape to save their lives and the life of Carrie.


Why I chose this book: I remember reading this book as a young teen. It really struck me, how unfair and cruelly these kids were treated. I wanted to jump into the pages of the book and rescue them. It’s one of VC Andrews’ best works, when it was really VC Andrews writing and not a ghost writer as writes under her name now. She touches on so many deep issues in this single book.
As an adult I can understand things I couldn’t as a child. Back then I was shocked by the incest between Chris and Cathy; as an adult—not that I approve or think it’s okay in any way—I can’t help but think if you put two adolescents who are going through puberty while being locked up for years on end with nothing to look forward to but abuse, who have formed a sort of family unit to retain a sense of normalcy, it stands to reason that without any guidance they would naturally turn to one another.

It also delves into the deep greed of one woman, who would rather keep her wealthy, fantasy life with her trophy husband and pseudo happiness than keep her children alive, let alone healthy and free. As much as we’d like to believe that couldn’t really happen, that would be deluding ourselves. Abuse is nothing new and is perpetrated by selfish people.
It also opens the debate as to whether a person can call themselves Christian when they use it as an excuse for brutality and vindictiveness. I personally feel that God is about love, and would not condone such behavior.


Why this book was banned: It seems pretty obvious. Not only does it deal with abuse and incest, there is a rape scene between the siblings—pretty heavy, blatant, graphic material. The book has been banned at various times from various places, and I don’t know that you’d be able to find it in any school library due to the graphic rape scene and incestuous passages.
Do I think it should be banned? I don’t think any book should be banned, per se. I think every parent has the responsibility to make sure that what their children are reading is appropriate. I also think that each individual librarian has the right to choose whether they think a book is appropriate to be carried in their schools library. That being said, if a student wishes to bring the book from home to read in school, or to write a book report on, I don’t think the school has a right to tell them no if their parent(s) has already said yes. Personally, I think Andrews could have written the same book without being so graphic, and it would have the same impact. Still, she chose to write it her way, and I respect that. And I’m a fan of the book. It ranks up there in probably my top 20 or so of all-time favorite books.


The giveaway: Now, for the good stuff! I’m going to send the winner of the contest a copy of the controversial Flowers in the Attic, your choice of paperback or Kindle edition. All you have to do is fill out the form below with your email (so I can contact you if you’re the winner). That’s the only requirement to enter. Want an extra entry? Leave a comment below telling me if you’ve read the book and what you think of it, why you’d like to read it if you haven’t, if you think it should be banned, or what your favorite banned book is—anything that has to do with this or any banned book, really.
Good luck!

Use the links below to hop on over to the next blog.


Looking for a Place to Form an Author's Critique/Editing Group?