Whispers of Razari
by
Cindy C Bennett
and
Jeffery Moore
I'm really excited about my new release! It's different than anything I've done before. I wrote the book with one of my critique partners, Jeffery Moore, author of The Bounds series and Jericho Solus, both speculative fiction novels. Whispers of Razari is a YA speculative fiction, though some might call it sci-fi, fantasy, or paranormal as well. Hope you enjoy it! Get a sneek peek here of the prologue and first two chapters. 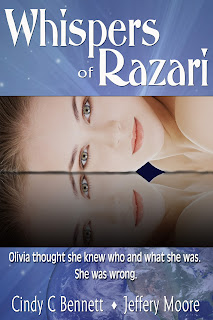 When sixteen year old Olivia Adams wakes from a horrible car accident that killed her parents, she knows she’s something different. Olivia died, and now the soul inhabiting her body needs to find out who - and what - she is. A glimpse of a world called Razari burning is the only clue to her previous existence—a tragic memory, sparking events that endanger the people helping her.


Jacobi McKenzie has lived in Crescent, Montana for more years than he can remember, even though he's only seventeen. He's been waiting, but for what he isn't sure. Jacobi recognizes Olivia for what she is before she's even aware of it herself and the effect she has on him threatens to expose his true identity--a thing he’s worked hard to conceal.


They come together in an explosion of emotion that neither of them is supposed to feel. As Jacobi fights for Olivia's life, protecting her from those who would use her for their own selfish purposes, together they unravel the mystery surrounding the destruction of their race.


Read more at the Whispers of Razari blog!


Moore was born in Germany. As a military brat, much of his childhood was spent abroad, growing up in Germany on military installations. He subsequently enlisted in the military and served for ten years as an army pilot. While in the military, he lived in Italy and South Korea and deployed to many European countries. He has traveled to Australia, Japan, Singapore and most European countries. His experiences and contact with many different cultures helps form some of the elements in his stories. He currently works for a global IT company and lives in Massachusetts.


Bennett is the YA author of several books. She lives in Utah with her husband and two daughters. Both of her sons have married, giving her two more daughters (in-law). She loves gooey cookies, dark chocolate, and cheese popcorn. She hates housework and cooking, and has no plans to become a domestic goddess. She occasionally co-hosts a geek podcast with her son, called Geek Revolution Radio. Her favorite pastime is riding her Harley.


Find more about Cindy here.
Posted by Cindy C Bennett at 12:00 AM