So, yeah, I'm a week behind in posting this, but since we were still in the middle of the blog tour for The Experiment I didn't want to have too many conflicting posts.

The first annual Salt Lake Comic Con was held here in Salt Lake City on September 5, 6, and 7. I had a feeling it was going to be big when they pre-sold so many tickets they had to change the venue. But I couldn't begin to imagine just how big it really would be. It was the biggest (meaning most attended) inaugural Comic Con ever, and the 3rd most attended of any Comic Con ever. On Saturday, there were over 80,000 people in attendance. The fire marshall closed the doors, and they were refusing to let people in, even if they had a ticket!

It was an exhilarating three days, though. I wasn't able to get around nearly as much as I wanted to, spent most of my time at my table, but I did manage to sneak off a few times. And wouldn't you know it, that's when someone would come to buy a book! I did have my beautiful daughter-in-law with me for the 3 days, though, so she would just text and tell me to get my butt back to the table.


The amazing energy in the place kept me pumping, even when exhaustion threatened. I had to be there at a time that for me is basically the middle of the night (because I work at night and so usually sleep a good portion of the day). But the people who attended were friendly, fun people. And those who were there as vendors blew me away with their creativity.


I was sandwiched between two such talented people. To my left sat the handsome Kienan Lafferty, who quickly sold out of his original drawings from his free online comic book called Emma, which he calls "a little girl meets the walking dead". How cool is that? I went online and read them (he has 2 issues up) and they're pretty dang awesome. You can read his comics free here.

To my right sat the uber cool Dan Schaefer, who just happens to be the storyboard artist for the TV show Grimm. He also writes comic books, and was one of the original artists for the cartoon Teenage Mutant Ninja Turtles (90's version). Dan has a company called Filmstoryboards.com, and guess what they do? Super nice guy, too. He was only charging $3 for his comics, not the $20 most others were!


My son, who I love to geek out with, was there on a VIP pass, and managed to wrangle a ticket to get a photo with Stan Lee. As he was standing in line, he called to tell me he could have two people in the picture, and did I want to come? Um, hello, YES! Someone gave him a free photo with William Shatner (who was charging $75 a pop!), so he let me come for that as well. 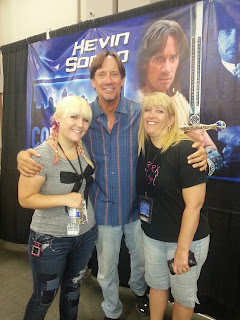 My daughter and I went to get a photo with Hercules . . . I mean, Kevin Sorbo. That dude is still rockin' it at age 54. (Recognize my beautiful daughter? She was the model on the original Geek Girl cover with black hair.)


So, now here's my stalker story. As in, I'm the stalker. (Don't judge yet.) There was this dude walking around who was a dead ringer for David Tennant. Have I mentioned David Tennant is my all-time fave Doctor? No? Well, he is. So this guy comes by my table on the first day and I ask him if I can take his picture. Didn't have my glasses on so I didn't realize it was fuzzy (stupid old eyes!). So I spent the next three days trying to find him. On the second day, my daughter found him and took a picture with him in what she calls her "creepy" pose (she's not wrong).


But finally, twenty minutes before the thing ended on the last day, success! I found him and nabbed a photo.


There was a ton of cool Doctor Who stuff, and people there, which helped feed my obsession. The Doctor Who I'm with in the picture below is my friend's son, and he came to my table specifically to get a picture with me because I asked him to. What a sweetheart, huh?

Comic Con was one of the funnest things I've done in a while. I highly suggest if you ever have the chance, you get yourself to one. Heck, come to the Salt Lake Comic Con next year. I guarantee they'll be having one, and it's going to be even bigger. Then, while you're there, come find my booth and say hi, because I can promise I'll be there - maybe with my own cosplay on!

Both of these cakes, as well as the Tardis cake, were made by Mad Hatter Cake Studio.