My Own Mr. Darcy Review 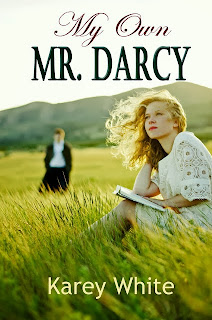 One of my favorite contemporary authors is Karey White. I still get teary-eyed when I think about her book, Gifted. I really love all her books. So when Karey sent me an ARC of her newest novel (pays to have connections!), My Own Mr. Darcy, I had high expectations. I wasn't disappointed.

I have to admit that Karey sent me the ARC early enough I should have had it read by the time she ran her book blast. But, life being what it is, I wasn't able to finish it in time. I kind of glad now, because rather than rushing through this gem of a book, I was able to savor it.

Elizabeth (suitably named) is dragged to see Pride and Prejudice at the age of 16. Expecting to hate the movie, she finds herself instead obsessed with a certain character played by the gorgeous Matthew Macfadyen. She determines no man will ever be good enough if he isn't Mr. Darcy, as embodied by Macfadyen. Because of her obsession, she never dates anyone more than twice.

Her BFF, fed up with her insanity, forces her to make a deal that she'll date the next guy for 10 dates before she determines he isn't good enough. Lizzy agrees, and begins dating the completely-opposite-of-Mr.-Darcy Chad. Not long after, into her bank where she works saunters the moody and almost-double of Macfadyen Matt Dawson. Her heart begins a summersault adventure of whether to takes what feels right, or what she's always dreamed of.

Karey makes Lizzy completely charming, and manages to make it difficult as the reader to determine which way Lizzie should go. Just when you think you're all for one of her suitors, the other does something lovely enough to make you want her to be with him. In the end, she makes the right choice (in my opinion) for what is a real chance at love. You'll have to read it to see which guy wins her heart.

With the abundance (it seems) of books focusing on Mr. Darcy and/or Jane Austen obsessions, it takes a lot to stand out from the crowd. Karey definitely manages it in this delightful tale of humor, romance, and choices. I highly recommend this book.

Karey has graciously allowed me to post an excerpt, and is allowing me to give away an ecopy of her book as well. You can sign up on the Rafflecopter beneath the excerpt! Lots of ways to enter and earn extra entries!


Mornings at the bank were busy. Courtney and I worked the inside teller windows and Pete ran the drive-thru. Our branch of Oregon National Bank was located close to the university and several streets of small businesses. Mornings were spent preparing all those little stores for the day’s business with cash for their drawers and petty cash boxes. Evenings, we had a flurry of deposits.
It was a busy Monday morning. I was looking out at the line of waiting customers when he walked in. He was taller than anyone in the room. Of course. His hair was dark and a little disheveled. It was hard to see from where I was, but his eyes looked like they were blue. And best of all, he didn’t smile. He looked gorgeously unpleasant and impatient. He looked around the room and his eyes met mine. Still he didn’t smile. My heart was racing. He looked perfect.
I gasped, shut my thumb in my cash drawer, and then tried not to cry while Mr. Sandoval from a hearing aid store asked me if I was okay.
When I finished Mr. Sandoval’s transaction, I looked at him again.
I did my best to time it so I’d be his teller. I went a little too fast with one customer and accidentally shorted her a twenty dollar bill. I tried to concentrate as I corrected the transaction. I slowed way down on the next customer, but just when I thought I was finished and would be able to help him next, my customer asked me to break a ten into change. He walked up to Courtney’s window while I counted out nickels and dimes. Furious, I stomped my foot. Not too loudly but enough to release a little of my frustration.
I listened closely as Courtney helped him to see if I could learn anything, but he hardly spoke. He gave a terse nod when Courtney thanked him for coming in and turned on his heel and left. He had excellent posture and a nice, confident stride.
I finished with my customer, and then before anyone else could step forward, I picked up the phone and dialed Courtney’s extension. She glanced at her phone’s display and looked over at me curiously.
“Who was that?” I whispered when she picked up the receiver.
Courtney shielded her mouth while she spoke. “Elizabeth, look how many customers there are.”
“I know. Just tell me who that was.” I watched as Courtney picked up her last transaction slip.
“His name is Matt Dawson.”
“Is he married?”
“I have no idea,” Courtney said, glancing toward Delia’s desk.
“Was he wearing a ring?”
“I didn’t look. What’s going on, Lizzie?”
“I just need to know about him.”
“Well, I don’t know anything about him and Delia’s watching us. I’ve gotta go.”
Matt Dawson. Matt. Matthew. Like Matthew Macfadyen. Dawson. It was pretty close to Darcy. The only way it could be better is if his name was Fitzwilliam but I’d never met a Fitzwilliam in my life.
Matt Dawson.
This had to be a sign.
Two days later, he was there again. His clothes were modern but it was easy to picture him dressed as an English gentleman. I could hardly tear my eyes away from him.
This time my timing was impeccable and I put on my best smile when Mr. Dawson stepped up to my window.
“How can I help you today?” I asked.
“I’ve listed the denominations I need on the note.” He didn’t smile. In fact, he barely looked at me.
“Of course. I’ll get right on that.” I dragged my gaze away from his beautiful face and his sapphire blue eyes and began putting together the money he needed. “Nice day out there today, isn’t it?” I said as I tapped a stack of ones on the counter and wrapped them with an elastic band.
“Mmm.” His voice wasn’t exactly right, but it was close enough.
The logo on his note said, “Pink Salamander Books.”
“You work at the bookstore? I’ve been meaning to come in there. I’ve heard it’s one of the best bookstores in town. Not as big as Powell’s but definitely more personal.”
“I don’t work at The Pink Salamander. I own The Pink Salamander.”
Ooh. A little egotistical. Nice.
“Oh. How exciting. That must be so interesting.”
“Mmm.”
I counted out the money and then put it in his bank bag. “Have a nice day, Mr. Dawson.”
“Indeed.”
My hand flew to my heart.
Indeed? Had he really just said indeed? Oh, that sounded so refined and aristocratic. It carried the perfect amount breeding and class.
And yes, his eyes were blue. Lake water on a clear day blue. Summer sky blue. Pools of gorgeousness blue.
And he wasn’t wearing a wedding ring. His long, elegant fingers held no jewelry at all.
Somehow I had to make him notice me. Somehow I had to become the object of his affection. I wanted him to adore me, no, more than that. I wanted him to love me most ardently. After all these years, could my dream finally be within reach?

Author Karey White Karey White grew up in Utah, Idaho, Oregon, and Missouri. She attended Ricks College and Brigham Young University. Her first novel, Gifted, was a Whitney Award Finalist. She loves to travel, read, bake treats, and spend time with family and friends. She and her husband are the parents of four great children. She teaches summer creative writing courses to young people and is currently working on her next book.