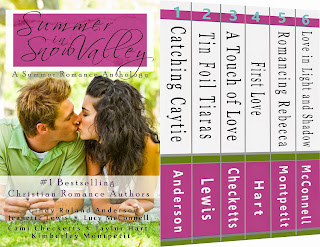 Careful of the mud,” he said, pointing at the low spot ahead where water had pooled, creating a large mud puddle across the trail.
The banks on either side of the puddle weren’t high, but they were steep and covered with long grass. Annalisa and Josh were picking their way along the edge and Cameron could see the mud creeping up over the soles of their shoes.
“I’ll be so ticked if I ruin these,” she moaned, holding out a sequin-clad foot.
“You and your shoes,” Kyle said with a light chuckle. He turned his back. “C’mon, I’ll piggyback you.”
“Ah …” He was much bigger than she was and he was obviously strong, but she’d always been self-conscious about not being a stick.
“What’s wrong, afraid I’ll drop you?” he teased.
“No, but I’m not exactly light …”
“Oh brother,” he bent his knees and held his arms out to his sides. “C’mon, jump.”
Her throat felt dry as she put her arms on his shoulders and gave a small leap. His hands clamped behind her knees as he straightened, seemingly without any effort.
“Hold on,” he instructed.
Cameron didn’t need to be told. She wrapped her arms around his neck, careful not to choke him. His hair tickled her nose and smelled like shampoo and his shoulders were warm and muscled under her arms.
Kyle maneuvered around the mud and she prepared for him to stop and set her down, but he didn’t. He kept going, walking easily down the trail with her on his back.
“Uh … you can put me down now,” she finally said.
“Yeah, I could,” he agreed … and kept walking.
“We’re over the mud, thank you very much,” she didn’t really want him to put her down, but it seemed polite to suggest it.
“Okay,” he said … and kept walking.
“Now you’re just showing off,” she muttered good-naturedly and he threw her a grin over his shoulder.
“Yup.”
She tightened her arms slightly and her heart leapt when she felt him squeeze her knees in return.
Oh yes, taking the day off had definitely been a good idea.
Posted by Cindy C Bennett at 5:00 AM