Blog Tour: The Wrong Side of Magic 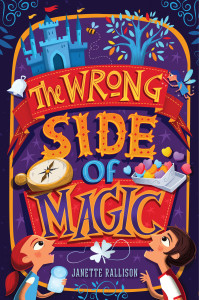 Hudson Brown stopped believing in magic long ago. That is, until the day he is whisked away to the magical land of Logos by a curious compass given to him by his off-beat neighbor, Charlotte.
Hudson discovers that Logos is a land ruled by words, thoughts, and memories. A fairy might ferry you across the river for the price of one memory. But be sure to look out for snarky unicorns, as they will see through those who are not pure of heart.
Not understanding the many rules of Logos, Hudson is quickly saddled with a troll curse. Charlotte, who, along with her father, was banished from Logos, can help get rid of the curse--but only if he agrees to find the lost Princess of Logos in return. 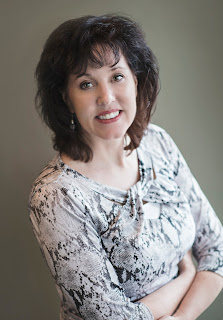 Janette Rallison/ CJ Hill writes books because writing is much more fun than cleaning bathrooms.  Her avoidance of housework has led her to writing 26 novels that have sold over 1,000,000 print copies and have been on many reading and state lists. Her books are fantasy, sci-fi, and romantic comedy because hey, there is enough angst in real life, but there’s a drastic shortage of humor, romance and hot guys who fight dragons. She lives in Arizona with her husband, kids, and enough cats to classify her as eccentric.

Character Casting
The main characters include two thirteen-year-olds, a pair of snarky Brittish unicorns, and a couple six-foot-tall roaches, so it would be hard to name a complete cast. (I will resist the urge to cast politicians in the role of the roaches, although I really want to.)
Charlotte is a cute redhead, so perhaps Harley Bird would work but as far as Hudson . . . well, I wish Jonathan Taylor Thomas was thirteen and not thirty-five, because he had that sort of mischevious charm that I imagine Hudson to have.
The tyrant king is an easy call. I'd cast Tim Curry, probably because I thought he made such a convincing, animated, and yet likable Long John Silver in Muppet Treasure Island. (Yes, I do own the movie and can hum along with the songs.)
As far as Charlotte's father, Aziz Fantasmo, I always imagined him to be a lot like Christopher Lloyd from Back to the Future. He's just a little bit crazy and a flamboyant dresser.

Snippet
SOMETIMES MAGIC SNEAKS up on a person like a sudden rainstorm, or bad news, or a mugger wearing really quiet shoes. That’s what happened to Hudson Brown. He was an average eighth grader, with average brown hair that usually needed to be cut and average brown eyes that didn’t always pay attention to his teachers. He lived in an average bedroom that needed to be cleaned and had average friends— many of whom also needed to be cleaned.
In short, Hudson was the type who hadn’t believed in magic for years. Truth be told, magic hadn’t believed in Hudson for even longer, but boys are often getting tangled in trouble, and Hudson was no exception. Except his trouble involved trolls, wizards, and several other things that wanted to kill him.
It started with a cat. Many problems do, which is why dogs, mice, and grumpy old men don’t like them.