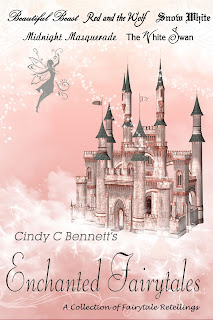 Enchanted Fairytales is now available. It's a compilations of my fairytale retellings, some of which you may have already read. Below you can read what each of the fairytales are about and where it's available as both and eBook and paperback. As always, you can purchase each fairytale retelling individually as well.

Want to win a copy of Enchanted Fairytales? Cu's Blog Tours kindly spotlighted the book for me. She's running a contest to give away an ecopy of the book. You can enter here.

Enchanted Fairytales is a retelling of five different fairytales from the imagination of Cindy C Bennett.


Beautiful Beast: Though she knows it's cruel, Calli agrees to accompany her friends to Monster House where it is rumored the beast howls at the moon each sunset. Alex believes Calli has bribed her way into his home in order to get a look at the beast of Monster House, and is determined to hate her. He isn't prepared as she batters down the hard walls of his soul with her kindness and humor.

Red and the Wolf: Three years ago, Rafe Wolfe left their tiny mountain burg of Piera, leaving Ruby Hood behind to mend her shattered heart. Now, Rafe has come home to compete with his brother Lowell for Ruby's heart. But Rafe and Lowell have intimate knowledge of the wolf attacks that threaten their home. Can Ruby live with the same knowledge, or will it forever destroy her?


Snow White: Left her at the mercy of her stepmother Katarina, Snow White is sent into the forest to be killed. Escaping, she stumbles upon an enchanted village created by Katarina to entrap Prince Philip after he spurned her. Philip believes Snow White is the one spoken of who can break the curse that holds Fableton. Snow's only hope of winning freedom for herself and Fableton is to defeat the evil and powerful Katarina.


The Unmasking of Cinderella: Amella Augustus has lived under her stepmother's cruel reign since her father's death. Then she meets the mysterious, enigmatic Dayla. A day later she runs into Char - literally. Just when Amella begins to believe she's found her happily ever after, Iona pounces in and takes Amella away from Char, Dayla, and dreams of happiness. Now Amella must take charge of her own destiny, and make a decision that can either give her the peace she’s longed for . . . or return her to the misery she’s lived in for so long.


The White Swan: Benno von Rothbart, a powereful sorcerer, is jealous of Odette's love for Victor. Victor and Odette are unaware of Benno's powers and manipulations to come between them and win Odette for himself. When Benno uses his powers to transform Odette into a swan, she finds herself in a fight for her freedom and for Victor in this retelling of the classic Swan Lake fairytale.
Available now at: