This week I found out that my book, Rapunzel Untangled, has been nominated for TWO awards! I'm so excited I can hardly stand it.

The first award it's been nominated for is a Whitney Award. To be nominated for this one, you have to have your book nominated at least 5 times by 5 different people. So while I was not told who nominated it, I'm very grateful to those who did.

The second award is a Cybils Award. I'm not exactly sure how the nomination process for this award works, but I suspect it was nominated by my publisher, Sweetwater Books, which is very cool of them to nominate my book out of all their books.

If you're curious about Rapunzel Untangled, you can read the blurb below. 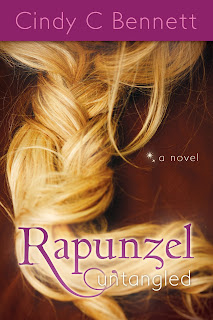 Fab Fane Fannigan: Are you saying you live at GOTHEL MANSION???
RG: My mother calls it Gothel Manor, so maybe that’s different?
Fab Fane Flannigan: No, Rapunzel, there’s only one that I know of. It has to be the same. So you live in the tower?
RG: Uh, the tower? I don’t know. Is it a tower?
Fab Fane Flannigan: Yes, it is. I know where it is. Rapunzel, promise me one thing.
RG: Okay.
Fab Fane Flannigan: Don’t Google your house.
Rapunzel is not your average teenager. For one thing, she has a serious illness that keeps her inside the mysterious Gothel Mansion. And for another, her hair is 15 feet long. Not to mention that she’s also the key to ultimately saving the world from certain destruction.

But then she meets a boy named Fane, who changes all she has ever known, and she decides to risk everything familiar to find out who she really is.

Filled with romance, adventure, and mystery, Rapunzel Untangled is one story you won’t want to put down. Discover the true meaning of love and friendship in this modern twist to the classic fairytale.