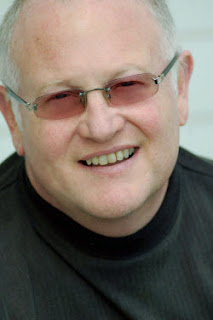 Michael Carney has been writing professionally since he was 17, which was a long time ago in a galaxy not so far away. He began his writing career straight from high school, writing radio advertisements for a bright and shiny new radio station in the glorious South Island of New Zealand (only a few hours drive from that wonderful scenery made famous by Sir Peter Jackson in 'Lord of the Rings' and, latterly, 'The Hobbit').

In the decades since, Michael has carved out a career in advertising and marketing, as a copywriter, Media Director, Strategic Planning Director and Online Marketing specialist. These days he writes and administers online training courses covering a range of Social Media Marketing and eCommerce topics at http://NetmarketingCourses.com.

In addition to writing a towering inferno of newsletters, reports and presentations Michael is the author of "Trade Me Success Secrets" (first and second editions), the top-selling book about NZ's online auction site Trade Me. In his spare time, Michael has also written (and mostly directed) a number of well-received stage plays over the years, some aimed at children and young adults, others produced for Christian audiences. Michael has been planning out the exploits of the OUTCAST ANGELS for many years.


Q&A with the Author:

Plotting. I tend to plot out each beat of the story, typically write a line to encapsulate each scene. Then I work my way through the story turning each line into a chapter. [It’s a lot tougher to do than it is to describe!]

Persevere. Whatever you’re writing, you’ll come to a place that seems impenetrable. If  you can’t see another way through, then start on the other side of the barrier and write forward from that. Eventually, you’ll be able to backfill and solve the problem.

Do You Love Epic Fantasy Tales of Angels and Demons, Laced With A Hint of Alchemy? Then Check Out ACADEMY OF SECRETS! 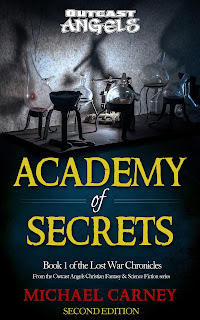 It’s the year 1610. The world is in grave danger if a long-missing artifact falls into the hands of the Academy of Secrets, a group whose members have gained unnatural powers through alchemy. And Chrymos, a young woman with a mysterious past, may hold the key.


For Chrymos, scrabbling out a wretched living on the streets of Renaissance Naples, the Academy represents a chance to gain special powers and make a difference in the world. But can she leave behind all the people that she cares about?

And what about the OUTCAST ANGELS, a ragtag group of former angels exiled from Heaven at the time of the Great Rebellion, who are desperately trying to stop the Academy? They face an uphill battle against alchemy-enhanced humans who can become invisible, cast illusions and create storms and tornadoes.

Will the Academy recover the missing artifact? What part will Chrymos play? And will the prophecies of the demon Nekhbet -- that the artifact's recovery will trigger the Lost War -- come true? Find out in this fast-paced historical fantasy thriller set in Late Renaissance Italy.

ACADEMY OF SECRETS is the first novel in the LOST WAR Chronicles, part of the OUTCAST ANGELS book series by MICHAEL CARNEY.


“Don’t let her escape!” shouted Henricus, as he watched the young woman scrambling across the badly-damaged top floor of a derelict building in the residential quarter of Naples. Several of the Alchemae, Academy graduates with enhanced powers, rushed after her. A handful of hired thugs, whose not-so-unique talent was primarily brute force, joined in the chase.

The two groups were effectively herding the young woman towards the most unstable corner of the building, where large sections of the floor had collapsed into the darkness below. Even Girardus, whose acrobatic abilities were unmatched, proceeded carefully across this hazardous surface.

The woman suddenly checked her headlong flight—not because of any concerns about the void into which she might have plunged, but rather because a ten-foot-tall, double-headed monster had just blocked her path. This terrifying creature—conjured up by the Alchemae’s master of illusion, Apollinaris—breathed out great torrents of flame. Its two heads—on the left a hissing serpent, on the right a snarling lion—were poised, apparently ready to strike the woman at any moment.

“Excellent,” Henricus remarked to his Academy colleague, Zulian, “Apollinaris has outdone himself tonight. His latest creation looks like a cross between a hydra and a chimera, if I remember my Greek mythology correctly.”

Henricus and Zulian stood on the far side of the building, close to a bonfire which the Academy’s men had lit earlier in the evening with the goal of attracting the lazzaroni, Naples’ teeming masses of beggars, poor and homeless. It was a cold, wet night and the bonfire had proven an effective lure. Unfortunately, as Zulian’s nose told him only too clearly, the lazzaroni might be better described as the non lavato, the unwashed. He could smell their choking stench everywhere, especially as the bonfire liberated the odors from their wet clothing. Zulian, for one, hoped that this recruitment mission would swiftly conclude so that he could escape the horrific smell.

When the Academy’s trap was sprung, several of the lazzaroni had drawn their swords—only priests or the most wretched of paupers would go around unarmed in seventeenth century Europe—but the supernatural powers of the Academy’s enhanced had quickly discouraged any significant opposition. Some had sought to run but only the young woman had successfully eluded the Academy’s grasp. It seemed, however, that her freedom would be short-lived.

“She’s trapped,” smirked Zulian, “nowhere to run. Even if she has the nerve to get past Apollinaris’s monster, she’d be crazy to try to jump the gap—it’s a very long way down. We’ve caught her now.”

And so it seemed, until their quarry appeared to notice that the creature in front of her had done little more than look threatening. Then she thrust her hand directly into the path of one of the bursts of flame that the monster spat out.

“Amazing,” said Henricus. “She’s much braver than I would be. Now she knows for certain that the monster is an illusion.” Before he could instruct his men to close in, the young woman made her own move.

She plunged straight through the creature’s false image and rushed over to the collapsed section of the floor. Before anyone could reach her, she leapt across the vast gap, somehow made it almost to safety, and then could be heard scrabbling desperately for a handhold as her grasp slipped on the rain-splattered bricks at the edge of the abyss.
Henricus and Zulian could no longer see the young woman, because of the darkness enshrouding that section of the building. The crescent moon now hid behind rain clouds and the corner itself was too far away to be illuminated by the bonfire.

Henricus squinted into the darkness, fearing the worst. He could hear the occasional impacts of a few dislodged fragments of rock, but no sound of a body crashing down to the lower floors.

Then one of the searchers shouted out. “She’s made it to the stairwell! She’s going to get away!”