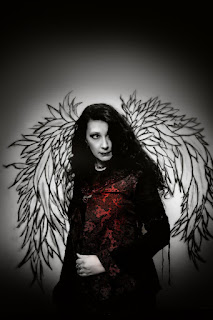 Claudette Melanson writes & edits in Guelph, Ontario, with her husband Ron and four bun babies: Tegan, Pepper, Butters & Beckett. She graduated from Indiana University of Pennsylvania with a BA in English and an MA in Literature. She's wished to be a Vampire since age five. She hopes to one day work full time as an author, since there are many, many books living inside her head.

In her spare time she enjoys watching Japanese Anime and reading vampire stories....along with other great fiction. She is also very interested in good health and is an advocate of Ketogenic eating, using whole and natural foods. Her favorite foods are bulletproof coffee, cashew flour crust pizza and treats made with xylitol and almond, coconut or cashew flours.

Future dreams include writing many more books and spending more time with her son Jacob. Her biggest dream is to make Universal Halloween Horror Nights a yearly event with hubby and son. A Rabbit Rescue fanatic, she also hopes to help rescues all over the world save many innocent lives.

Q&A With the Author:

5- Is there a message you would like readers to get out of this book? What is it? Yes. Being different is perfectly okay. You need to be who you are without worrying what other people think about you. Also, if you’re one of the people who thrives on being mean to others, simply put, you suck. Just stop it. Why don’t you worry about your own life, instead of needing to put others down to feel good about yourself. Being mean to a fellow human, making fun of them, bullying them—that’s NEVER okay. Oh, and vampires are people too! LOL

Could Maura's life get any worse? ...turns out it most certainly can. 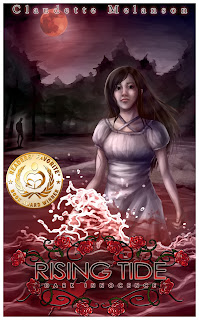 Isolated and sheltered by her lonely mother, Maura's never been able to make friends. She seems to drive her classmates away—except for the odd times they pay enough attention to torture her—but she doesn’t understand why. Maura considers herself to be a freak of nature, with her unusually pale skin and an aversion to the sun that renders her violently nauseous. Her belief is only worsened by the fact that almost everyone around her keeps their distance.

Even her own father deserted her before she was born, leaving Maura alone with her emotionally distant mother, Caelyn. Even though Maura is desperate for answers about her unknown parent, Caelyn remains heartbroken and her daughter can’t bring herself to reopen her mother’s wounds. Or is there a more sinister reason Caelyn refuses to utter a word about her long-lost love?

When a cruel prank nearly claims Maura’s life, one of her classmates, Ron, rushes to her rescue. Darkly handsome & mysteriously accepting, Ron doesn’t seem to want to stay away, but Maura is reluctant to get too close, since her mother has announced she’s moving the two of them to Vancouver…nearly 3,000 miles away from their hometown of Indiana, Pennsylvania.

If life wasn’t already challenging enough, Maura begins to experience bizarre, physical changes her mother seems hell bent on ignoring, compelling Maura to fear for her own life. Vicious nightmares, blood cravings, failing health and the heart-shattering loss of Ron—as well as the discovery of a tangled web of her own mother's lies—become obstacles in Maura's desperate quest for the unfathomable truth she was never prepared to uncover.

2015 Readers' Favorite Gold Medal Winner for YA Mystery2015 RONE Award Finalist for YA Paranormal2015 New Apple Top Medalist for Young Adult EbookChosen as one of 400 for the second round of the Amazon Breakthrough Novel Award for 2014!!!
Rising Tide will sink its fangs into you, keeping you awake into the wee hours of the night

My vision was blurred, and the light in the room was too intensely bright. The same headache I’d been plagued with that afternoon pulsated through my skull. I made every effort to shut it all out and focus on that face. The long dark hair told me it was Ron before I could fully make out his features in the haziness that was my sight. When my vision sharpened, he smiled at me, but the softness in his eyes held the hard edge of worry.

“How are you feeling?” He kept his voice barely above a whisper, which meant he knew how sensitive my hearing was. Maybe he knew what was wrong with me. I was hurting all over…my throat burned like a bonfire, and the rest of me was so cold, I was sure they must be transfusing me with ice water.

I tried to speak to him, to demand a diagnosis, but I was too weak to utter a single word. Caelyn appeared then, cooing over me protectively and imploring me to save my strength and keep quiet.

My eyes were drawn to a shape in the doorway of my hospital room. There was someone there, a tall, hulking human filling up the space. He—it had to be a man given the size—was shrouded in darkness. I could make out no discerning features whatsoever. A nurse pushed past him, only because he moved to allow it. Funny, even when she was right behind him, I could make out every detail about her. It was as if all the darkness in the room were reserved, solely, for this unknown stranger.

The nurse brought in a blood bag. Although I couldn’t remember any accident or see any bandaged wound, my brain tried to ferret out a reason for a blood transfusion while she was hooking up the bag.

While watching her, my eyes switched focus, glancing over at the liquid in the bag. Deep, dark crimson. I couldn’t tear my eyes away. My mouth was like dry desert sand, my throat the merciless sun burning over that desert at high noon.

A rattling gasp tore up through my chest, and my body convulsed. I was sure I was dying. My blood must’ve had some horrible disease tainting it, and the transfusion’s purpose was to dilute the infection.

Ron put his hand on my chest to hold me down. He seemed troubled, but other than that, much too calm for the gravity of the situation. “Relax,” he said to me with that same softness to his voice, “you just need blood, Maura.”

He reached out and nodded to the nurse. She stopped what she was doing and took the bag down, placing it in Ron’s hand. He tore open the bottom, in a practiced manner, and held it to my lips.

As shocked as I was by this turn of events, I complied. In all my waking hours, nothing had ever tasted better. And even though I knew what was happening was not what was supposed to be happening, in my dream I tore the bag from his grasp so I could gulp its contents down faster.