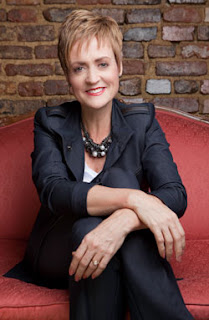 Brenda Novak’s latest “digital box set for a cure,” ALL I WANT FOR CHRISTMAS, is a contemporary romance collection of delightful and romantic Christmas stories. It features Brenda's Rita-nominated novella, “A Dundee Christmas”, as well as stories by some of the biggest romance authors of our time, including #1 New York Times Bestselling Author Debbie Macomber and romance favorites Bella Andre, Melody Anne, Violet Duke, Marie Force, Heather Graham, Laurelin Paige & Kayti McGee, Jane Porter, Melanie Shawn, RaeAnne Thayne, Melinda Curtis, Anna J. Stewart and Scarlett York. The set sells for only $9.99 (less than $1/story) and is up for pre-order now wherever e-books are sold. The box will be released November 1st and will only be available through December 31st.

All the proceeds will go to Boston University to help Dr. Ed Damiano (who also has a son with Type 1) finish engineering the artificial pancreas. Why is his work important? Because the artificial pancreas will go far toward helping insulin-dependent diabetics remain healthy until that elusive biological cure can be found. So, please, pre-order this boxed set today and encourage your friends and family to do the same. You'll get many hours of enjoyable reading in exchange for a small donation that will help a lot of people.

2. What do you love most in the world?

The beauty that surrounds us and the power of love to heal all wounds.

All the assorted Author's links are on the book's Amazon page:
~ Amazon ~ 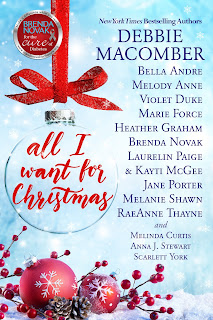 “5-B POPPY LANE” by Debbie Macomber
Come visit with Helen Shelton, her granddaughter Ruth and Ruth's husband, Paul. They'll offer you a cup of mulled cider and the story of how they met.
“KISSING UNDER THE MISTLETOE” by Bella Andre
For Mary Sullivan Christmas has always been about family. As she hangs her ornaments, she's swept back to the first days of her whirlwind romance with her husband--and the love that would be the foundation on which they built their family.
“FINDING EACH OTHER” by Melody Anne
Brayden Steele gave up his love of Christmas many years ago when he lost his mother and father in a car wreck. But the magic hasn’t given up on him.
“BEFORE THAT PROMISE” by Violet Duke
If anyone can make Drew Lawson believe in the magic of Christmas, it's the girl-next-door he's classified as completely off-limits.
“CELEBRATION AFTER DARK” by Marie Force
On the occasion of their 40th wedding anniversary, Big Mac and Linda McCarthy take a look back at how they came to be, while each of their children confront a new challenge in their own lives.
“SPIRIT OF THE SEASON” by Heather Graham”
While struggling to raise her newly orphaned nephew, Davey, widow Becky Wexham must deal with the feelings she experiences when she once again comes into contact with Tim Yeagher, an old flame and Davey's Little League coach.
“A DUNDEE CHRISTMAS” by Brenda Novak
Welcome to Dundee, Idaho, where the town is small but the hearts of the people living in it are large. A woman seeking refuge in an unfamiliar town during a snowstorm is taken in by a man who helps her discover a new sense of home.
“UNMATCHABLE” by Laurelin Paige and Kayti McGee
After Jane Osborne is unceremoniously dumped by a rich man, and then invited to his wedding, on (Christmas Eve no less), she decides to hire a date from Craigslist and pass him off as an upgrade.
“CHRISTMAS MIRACLE FOR DAISY” by Jane Porter
When his goddaughter, Daisy, is orphaned, confirmed bachelor Cormac Sheenan adopts her. All goes well until Marietta's seasonal Santa Claus promises his daughter a mommy for Christmas.
“CHRISTMAS WISH: A HOPE FALLS HOLIDAY NOVELLA” by Melanie Shawn
For the movie star and the single mom, will a Christmas Wish become their new reality?
“A COWBOY’S CHRISTMAS MIRACLE” by RaeAnne Thayne
Widow and caterer Jenna Wheeler is determined to spin Christmas into the stuff of magic for her four children, even if that means helping out her new landlord, sexy billionaire Carson McRaven..
"THE NIGHT BEFORE CHRISTMAS" by Melinda Curtis
Simon Castle' s on his way to a make-or-break meeting unseasonably scheduled for December 25--until the gorgeous redhead subbing for his limo driver takes him on a detour.
“GINGERBREAD DREAMS” by Anna J. Stewart
Can carpenter Hamish MacFadden show free-spirit Essie Goodman how magical family--and Christmas--can be?
“CRUEL INTENTIONS” by Scarlett York
For fans of Pretty Little Liars…It’s hard to be a rhinestone in a diamond world...I was far from living the dream, but now I'm stuck in a nightmare of lies, deceit....and murder. Merry Christmas to me.

KEN RETURNED TO THE CABIN relieved and excited. He’d spent most of the morning at his

mother’s place, calling every associate he could think of, searching for a legitimate position

Cierra could fill. And he’d found one. Lawrence Smith, a guy Ken had known in college, was

living in Boise. Recently divorced, he had full custody of his three children and ran an import

company that specialized in plywoods from Ecuador, the Philippines and Guatemala. His current

nanny was getting married and moving to California the first of the year, which meant he needed

a new one. And he didn’t mind that, for the time being, Cierra wasn’t a U.S. citizen.

already interviewed, and to do it sight unseen. But Ken had vouched for her and promised to

compensate Larry if she didn’t work out. Fortunately, Larry had been mollified when he learned

that Cierra spoke English as well as she did. He considered it a bonus that his caregiver would be

able to communicate with his children and teach them Spanish, since he frequently traveled to

Eager to tell Cierra the news, Ken had tried to call the cabin, but she hadn’t picked up. And

now that he was home, he couldn’t get her to answer when he called her name. Where was she?

That would surprise him. She wasn’t the type to relax in the middle of the day. It wasn’t like

her to hang out in her room, either, not when there were boxes that needed to be unpacked.

He checked her room—and saw some clothing stacked on her bed. Judging by the tags, all

still attached, these were the clothes his mother had bought. And, of course, he recognized his

“Cierra? Hey, you around?” He already knew she wasn’t. That clothing told him as much.

But he looked in the Jacuzzi room. And the gym. And the patio out back. He even unlocked the

old workroom, where Gabe used to build his furniture. She wasn’t anywhere.

It wasn’t until he came back to the living room, however, that he realized she was gone for

good. That was when he spotted the nativity set he’d bought, remembered how much she liked it

and noticed that something was missing.


Looking for a Place to Form an Author's Critique/Editing Group?