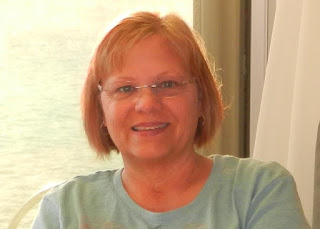 Debbie currently lives in northern California where the beautiful landscapes are often the settings in her books. The jagged coastline, the rolling hills with vineyards and the redwood forest make wonderful sceneries for her romance novellas.
When Debbie isn’t writing or traveling to a book signing, she’s visiting her family on the east coast, traveling to other places on her bucket list, enjoying her backyard, hiking with her husband and riding on the back of their motorcycle.
Although she currently writes romance and women’s fiction, Debbie’s book Ties That Bind is categorized as general literary fiction. Based on true events, Ties That Bind holds a special place in her heart.
As an avid animal lover and parent to two rescue dogs, Debbie donates a portion of her proceeds to animal rescue organizations. When you purchase one of her books, you’re also helping a furry pet with shelter, food and ultimately a new home!

. What do you fear most?

Just that the world has gotten a bit scary and I worry about my granddaughters. I worry about drugs, crime and overall the mean tone of our world. I have hope that we’ll turn it around. We need to.

4. What is your largest unfulfilled dream, and what are you doing to reach it?

I have many unfulfilled dreams. I’d love to make either the USA Today or NYT bestseller list. I’m working with two box sets that hopefully will do that. My other unfulfilled dream is to retire from my regular job so I can focus on writing 24-7. 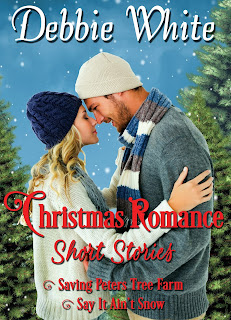 After the death of her father, Charlotte Peters makes the big decision to move back to Archer Lodge, North Carolina to help her mom and the family’s failing Christmas tree farm. After a quick stop into the local hardware store, Charlotte is confronted with a part of her past she’d nearly forgotten about. Or had she? Can Charlotte stay focused on why she came to Archer Lodge and let the past be the past, or will her heart be broken once again?

Say It Ain’t Snow!
Melissa Curry is desperately trying to save her family's ski resort. The drought has done everything it can to dry up their business. When she discovers the town council is planning a detour through the city that will likely chase the rest of the tourists away, Melissa jumps into action to save the day and the town.

From Say It Ain’t Snow

Melissa drove up the long driveway and parked. She almost didn’t recognize the place. The guys had made a lot of progress and soon they’d begin constructing the pavilion. Melissa could envision twinkling white lights, glowing logs in the fire pit, and low music coming out of the speakers. She was already planning the landscaping—lavender and other drought tolerant plants in redwood planters and hanging baskets of lantana would bring the color she was looking for. She took in a deep breath. The smell of freshly cut redwood filled her nostrils.
Melissa stood back for a moment watching Trent as he operated the small back hoe. She quickly moved her attention from Trent to the rest of the crew and watched for a moment while they wrestled with some huge boulders. After a few minutes of watching them, she resumed watching Trent. When he finally looked her way she flashed him a smile and a wave at the same time. He cut the motor off of the small tractor and soon made his way toward her, a huge smile stretching across his face.
“Trent, everything looks great. I can’t believe my eyes.” She gently caressed his arm. She could feel him stiffen slightly when she touched him.
“I’m glad you approve. I think it is coming along great, too.”
Melissa motioned to the picnic table. “Can we talk?”
Trent followed her over to the bench and sat down. He wiped the sweat from his brow, brushing his hand on his jeans. “What happened?”
“I did as you suggested. I tried to persuade him I had some kind of negative evidence. But without actually handing it over to him, he didn’t believe me for one second.”
Trent lightly rapped his fingers on the redwood picnic table. He gazed off toward the road and then fixed his gaze on her. “I have one more ace in the hole.”
Melissa’s eyes widened. “Oh?”
Trent scooted closer toward her. He leaned in close. As Melissa listened to Trent, her eyes widened as the details unfolded. She nodded every now and then acknowledging what he said. When he finished, she leaned back and stiffened her back straight, letting out a sigh. A sly smile fixed on her mouth. “I see. This changes a lot.”
Trent lowered his head. He brushed his hand through his hair. Melissa could see that it pained him to tell her what he’d just divulged. She reached over and caressed his arm. “I’ll be careful. He won’t know you said a thing,” she said, her face softening.
Their eyes locked for a moment and then Trent leaned in and kissed her. She closed her eyes and took in the softness of his mouth. She leaned back and smiled. “That was nice. I wasn’t expecting that.”
“I’ve wanted to do that for a while,” Trent said softly.
Melissa widened her smile. “Well…if I’d known how nice it was going to be, I would have encouraged you to kiss me long before now,” she said, letting out a giggle.