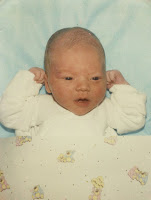 I thought I knew what love was. I really did. I loved my parents, my siblings, and I definitely loved my husband. But I didn't understand the true depth of unconditional love. That all encompassing kind of love that eclipses all else in your life, where you would absolutely do anything for someone else without a moments hesitation.

﻿﻿
Ryan came into the world the way he lives his life: boldly and without hesitation. He was an 8 lb 6 oz bundle of screaming, laughing, plunging-headfirst-into-life joy. As soon as they finished measuring, weighing, poking and prodding at him they laid him in my arms. I spoke to him and his screams immediately subsided as he heard my voice. His blurry-sighted eyes tried to focus on me and he gave a sigh, as if to say "There you are!" My heart tumbled and it's never been the same since.

Ryan was the perfect first child because he is a natural born leader. Fear isn't something that rules his life. He quickly proved himself to be stubborn (didn't get that from me at all! haha) and rambunctious. Not much holds him back. At nine months he walked, at twelve months he climbed out of his crib for the first time, prompting us to get him a toddler bed. He ran leaning forward, indicative of his personality ~ always in motion with somewhere to go.

﻿﻿﻿﻿﻿﻿When he was around 5 or so, the neighbors poured a new piece of sidewalk in front of their house. Troy, who owned the house and was aware of Ryan's propensity to perhaps make inappropriate use of the wet cement said to him, "Now, Ryan, you can't walk through the cement while it's wet." Ryan readily agreed, promising he wouldn't. Ryan did keep his promise. He didn't walk through the wet cement. He did, however, ride his bike through the cement. No one told him anything about riding through it.

﻿
When Ryan was 15 and a sophomore in high school, he decided for the first dance of the year he'd ask one of the hottest girls in school. It never occurred to him that a sophomore shouldn't ask a hot, 18-year-old, senior girl to prom. She went, and they had a blast.
Ryan also got his private pilot license before graduating high school.

Ryan is currently one busy boy! He goes to the University of Utah's Business School, he works part time at our cabinet shop, he is one of the directors of K-Ute Radio (the U of U's radio station), works part time for Clear Channel Media, and also is one of the founding members and helps run Bobo Broadcasting. And oh yeah, he does a weekly podcast which he plans, records, edits, and publishes himself. In between all of that, he's a newlywed (got married in June).

I recorded the podcast with Ryan for about a year, which was an absolute blast (now I'm just an occassional guest). I don't know a lot of moms who enjoy spending time with their son like I do. Ryan and I can talk for hours about Star Wars, movies, DC vs. Marvel, TV shows . . . everything, really. He's not just my son, he's my friend. How lucky am I?
﻿