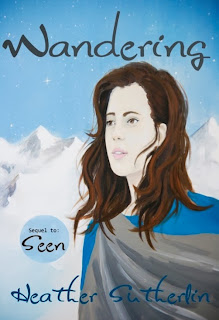 When you’ve travelled between worlds, there’s nowhere left to go but home.

Rory has never been so cold in her life. But the biting wind only reminds her of another pain that grows more intense with each passing day. Each night Jaron’s beautiful voice sings in her dreams, and each day her footsteps draw her closer to his side. Danger and intrigue at every turn, no distance is too far when you’re returning for true love.

Rin has spent the last five years searching for Rory across two worlds. Now a series of visions have him convinced he’s growing closer to finding her. But when Rory slips through another portal, taking his visions with her, he finds himself back at square one. To find her now he’ll need the help of an old friend and a little otherworldly magic.  This time he intends to bring The Wanderer home for good.

An Excerpt from Wandering:

Sometimes I think I've seen her face more times than my own.

Tonight she stands on top of a snow- covered mountain with the wind in her hair.  Her eyes crinkle at the corners as she squints into the distance. She shifts her stance, leaning, her body reaching forward and I can almost feel the racing of her heart as the wind billows around her, lifting her cloak and whipping her hair into her eyes. It reminds her of something she once felt, something powerful.  Blood pounds in my ears and for a moment we are connected, The Wanderer and I. Her pain, her longing, they choke me. She holds her breath as the wind grows stronger. It pushes against her so that her footing slips. I want to shout to her, warn her that she might fall, but I can almost hear her thoughts. She hopes it will carry her away. To bring her back.

The wind whips around her, swirling ice and snow at her feet and she begins to cry. Her tears freeze as they slide down her cheeks.  She doesn’t cry from fear or pain.  Not even the bitter, endless cold could cause her tears.  No, she cries because it is only the wind.

***
I woke up, panting, covered in sweat.  Turning over, I clenched my eyes shut in a desperate attempt to bring the images back into focus.

The visions began the very day we returned home from Rutahn, the world beyond the portal. I fell asleep on my aunt’s couch and probably hadn’t even started snoring when her face filled my mind. She was lying in the corner of a little hut, bundled in blankets and furs. I remember how she shivered, like she was trying to shake off her own skin. Her cheeks were flushed a bright red and she gasped for air, tossing in her makeshift little bed. An arm with skin the color of caramel reached toward her and wiped her face with a wet cloth. That’s when I realized she was sick. I woke up in a panic, my heart racing. I had fallen asleep afraid she might be dead and now instead of feeling relieved that she was alive, I was more afraid than ever. We still didn’t know where Rory was, but now I knew she was very sick. I worried incessantly about her after that. I dreamed of her nearly every night, gathering bits and pieces of information, clues as to where she might be.  After that, the dreams gradually increased in frequency, and then grew more intense.  Now, instead of just seeing Rory, I could feel a little of her thoughts, her emotions.  Most of the time it was a relief.  I saw her safe. I watched her grow strong again. I even saw her smile once or twice.

Then, there were nights like this one.  Nights where I could sense her terror, her despair, the aching loneliness or desperate longing for those she had lost. I would lie there helpless, watching her cry deep, heart wrenching sobs and I would wake up with my pillow wet, my face covered in sympathetic tears. Those were the nights that weighed on me.  Visions like this one often forced me out of bed and back into my research. It was impossible to sleep knowing she was out there somewhere in pain and longing to find a way home. That’s why I keep searching. For five endless years I’ve searched and I’ll keep searching until I find her and bring the Wanderer home.

Wandering is the sequel to Seen by Heather Sutherlin.
Posted by Cindy C Bennett at 2:15 AM