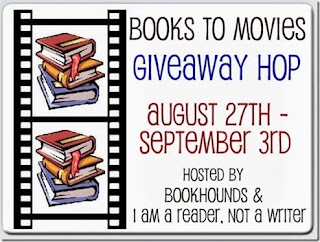 This is an awesome giveaway for me, as a lover of both books and movies. Sometimes they get it right when they make a book into a movie (Hunger Games) and sometimes they completely screw it up (Twilight). Then there's the rare occasion when the movie is actually better than the book. That's why for this giveaway I'm giving one lucky winner a copy of one of my favorite movies, which was based on a book, in which I love the movie more than the book. That movie is Stardust, based on the book by Neil Gaiman. If you haven't seen this movie, it's truly amazing.

The transformation of Tristan (Charlie Cox) from average, overeager dude into swoon-worthy heartthrob is so fantastic that I had to look it up and see if it was the same actor playing both parts. Add to that the perfectly devious Septimus (Mark Strong) and the witchiest of witches Lamia (Michelle Pfeifer) and you can't go wrong.

Then they added an unbelievable supporting cast with Humphrey (Henry Cavill - yes, that Henry Cavill who you won't recognize at all), King (Peter O'Toole), fallen star - literally - Yvaine (Claire Danes), Una (Kate Magowen), Young Dunstan (Ben Barnes), Ditchwater Sal (the hilarious Melanie Hill), snotty Victoria (Sienna Miller), Primus (Jason Fleming), and Secundus (played with perfect humor and a smashed face by Rupert Everett). The rest of the brothers, all ghosts, are so great I almost wish they'd had bigger parts. But maybe it was perfect having them in there for the amount of time they were - you know, sometimes less is more. Oh, and how can I forget Billy (Mark Williams). Make sure you watch every move, every twitch, every facial expression and foot movement made during his short screen time.

Also, don't miss the exchange between Captain Shakespeare (played with utter abandon by Robert DeNiro) and Ferdy (the uber-funny Ricky Gervais). I seriously don't know how they got through the scene without cracking up. Fifty takes, maybe?

Romance trumps all in the movie (which makes it one of my faves of all time), plus humor, thrills and chills. I've watched this movie more times than I can count, and now that I'm writing this post, I think I'll go watch it again!

Beneath the video you can sign up to win on Rafflecopter, where you can choose whether you want the book, DVD, or Blu-Ray. Then jump beneath that to find the list of other blogs on the hop for the chance to win more prizes! Good luck, everyone.


a Rafflecopter giveaway
Posted by Cindy C Bennett at 2:00 PM