I was invited to attend the premier for the remake of Saturday's Warrior, the new motion picture based on a college project in 1973 by Lex de Azevedo and Douglas Stewart. It was later made into a direct to video film in 1989, which is the version I knew as a young woman. I've always loved the story of the prodigal son returning home, and the music has always been amazing to me. So when I heard they were making the story into a film, I was pretty excited. The film opened today in select theaters. (My review below) 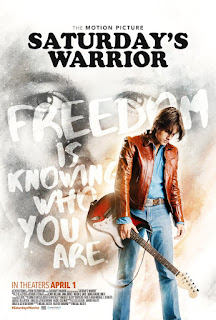 Official Blurb: Set in the turbulent 1970s, SATURDAY'S WARRIOR explores the age-old questions of “Where do I come from?” and “Why am I here?” Centered on twins Jimmy and Pam Flinders, the musical begins with a group of spirits making promises to each other before coming to live on Earth. However, with those promises forgotten, Jimmy, Pam and all the others find themselves on very different paths once on Earth. Jimmy (Kenny Holland) loses himself seeking stardom, and struggles with his faith, his identity, and his relationship with his family. Devastating tragedy strikes Pam, (Anna Daines) and her family. But will this devastation destroy Jimmy or help him rediscover who he really is? And what of the others? Will their promises be kept or be forever forgotten?

My review: I have to admit that I was nervous about the film. The original 1989 video is cheesy, but it's meant to be - that's half its charm. However, I didn't want the film to be cheesy, I wanted it to capture the essence of the original while being updated enough to feel relevant. Not that a prodigal son or a family is irrelevant in today's world, just that people are more cynical now than they were in the late 80's and so it needs a certain amount of edge to have mass appeal.

My stomach sank at the opening scenes. The first 20 minutes were cheesy, and I felt my hope for a great update slip away. And then something happened - the film's heart came to the surface. In a few places, lead actor Kenny Holland's baby-face made it difficult to buy the idea of him as a hardened rebel. But his amazing voice and the emotion that he conveyed when conflicted or sorrowful made up for that small flaw.

I will say the film is filled with beautiful, talented young actors, so whoever was in charge of casting did an amazing job.

I was more compelled by Todd's journey than Jimmy's, but still found myself tearing up a few times (which, as anyone who knows me will tell you, I rarely do). When his father races up the hill to embrace his son, the mom in me could completely understand and I felt the emotions to my core, especially when the rest of the family surrounded him, completely forgiving him for everything. I so understand that kind of forgiveness and love.

I am a bit stumped by the filmmakers' decision to keep the story set in its original 1972 time frame. Why? Seriously, the music, I feel, is timeless enough to be set in any time period - and of course it's amazing music; clearly Lex de Azevedo has always had the immense talent we know today. It felt a little too Partridge Family to me, and in fact, the movie makes a joke about that. If you're attempting to bring this movie to a new generation, why have it set during a period that's not only long before their time, but is also not that interesting of an era? Why not make the movie contemporary so that young adults and teens can relate to the characters? So for me, that's the biggest flaw in the movie and I was disappointed by that.

Overall I really liked it. If you're a fan of the original, you're going to love it. If you haven't seen the original, give it a chance. Get past the initial cheese and wait for the meat of the movie. The payoff is worth it. Also, watch for the joke with the clocks in the opening scenes. I don't want to give it away, but I don't want you to miss it either. 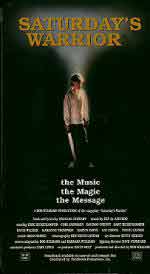