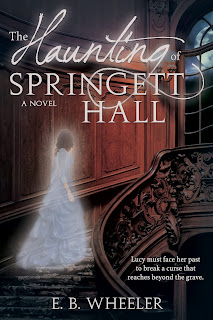 Eighteen-year-old Lucy doesn't know why she's haunting Springett Hall in Victorian England. All she remembers of her life is that she was trying to fix a terrible mistake. Now, a necromancer's plans threaten everyone in the house--living and dead--and her only hope of stopping him is enlisting the help of a servant named Philip--the one living person who can see her. But as Lucy delves into the mystery surrounding her death, she realizes Philip may have secrets of his own. 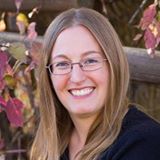 E.B. Wheeler grew up in Georgia and California. She attended BYU, majoring in history with an English minor, and earned graduate degrees in history and landscape architecture from Utah State University. She's the award-winning author of THE HAUNTING OF SPRINGETT HALL and BORN TO TREASON (May 2016), as well as several short stories, magazine articles, and scripts for educational software programs. She lives in the mountains of Utah with her husband, daughters, various pets, and as many antique roses as she can cram into her yard. If she had spare time, she would spend it playing harp and hammered dulcimer, gardening, hiking, shooting archery, knitting, and reading.

I find marketing much more difficult than writing. I'm an introvert, so I'm a lot more comfortable hiding behind my computer or a good book than interacting with people I don't know well.

The best “advice” I ever received was really more of a good example. I had been bullied for being smart and geeky and just “different,” so I tried my best to be “normal” and blend in. But then I met a friend who managed to be smart and geeky and do his own thing, but because he was confident
and comfortable in his own skin, he might not have been the most popular kid, but people just kind of accepted him. He helped me learn not to be afraid of being myself and not to care so much what other people think (a lesson I still have to relearn from time to time).

Top Ten List
1. I'm left handed.
2. I have a spinal cord injury, which caused partial paralysis in my left hand, so I'm a chicken-peck typist. A really, really fast chicken-peck typist.
3. I also have no hot or cold sensation in one leg. Don't trust me if I stick my toes in the pool and tell you the water's fine.
4. I'm scared of heights, but not of spiders.
5. In college I studied medieval and Renaissance history, so I learned German, French, Old Norse, Welsh, and Latin. I don't remember much of any of them.
6. I sing along with the radio while I drive.
7. I play the hammered dulcimer.
8. I think computers run on black magic, and even my electrical engineer husband can't convince me otherwise.
9. My super power is an incredibly keen sense of smell. This made me throw up every day when I was pregnant.
10. I've visited an honest-to-goodness haunted castle, and it scared the living daylights out of me.