A while back an author by the name of Sharon Shabinaw contacted me about the best way to go about publishing a book she was writing. We emailed back and forth a few times and soon she became one of what I call my "phantom author friends" (authors who I admire/like but have never met). She eventually decided to go with self-publishing and hired me to both edit and format her book.

Turns out the book isn't just Sharon's. It also belongs to her mother, Arlene Garrett. Their quest is to share stories, both their own and those given to them by others, about signs from God they've received. Do I believe in signs from God? Absolutely. Always have. In fact I'll share with you one that came to me within the past year or so.

I was thinking of selling my house and moving. I'd been separated over a year and felt like I needed a change from the house I was living in. It hadn't ever really felt like home so I decided that meant I should move. I went out house hunting, and eventually put a down payment on one. Almost as soon as I did I began to have really bad feelings about it. The more I thought of it, the more I felt like it was a crushing burden. So I finally did what I should have from the beginning and prayed about it. A little while later while standing in the shower I heard someone say, "You need to stay here for now." Yeah. Freaky, right? Someone was in my house? Nope, I looked, and no one was there.

So I said it aloud myself. "I need to stay here for now." Immediately the burden lifted and I knew I had my answer. I called my realtor, who informed me I'd likely lose my deposit, but I didn't care. I couldn't afford to lose it but figured it was a small price to pay for the relief I felt at my decision. (Note: the contractor was very understanding and did refund my deposit.)


At the time my dad was quite sick. He had heart disease, and had been going downhill steadily for a while. Still, I didn't expect him to actually die anytime soon. Three days after I made the decision not to move, he died. Three days. I can't even begin to fathom what it would have been like to be trying to sell my house and complete the new house with not only my grief at losing my dad, but also in the craziness that follows something like that as I helped my mom to get everything organized. Not to mention that about a month after he died I was presented with the divorce papers which, while expected at some point, I didn't expect while I was swathed in my grieving process.


Several months later, when life had resettled a bit, I found another home and it felt right, more right than the previous one had. I put my house up for sale, it sold in 4 days, and a month later I moved. A couple of months after that I was in my new home, where I am now, and I feel completely content and happy where I am. I'm near my children, near my mom, and near all of the things that currently occupy my life. If I'd ignored that sign, I'd be in the wrong house again, I'd probably have had a nervous breakdown last fall, and I wouldn't be in a place where my life is so complete.

Sharon and Arlene have compiled many, many stories about people, just like you and me, who have heeded the signs they're given and who've been grateful they have. If you're interested in the book, there are links below for you to find a copy for yourself. 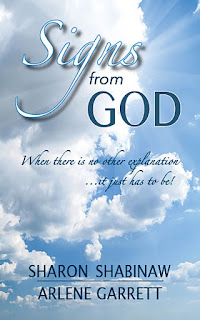 "It was the summer of 1990.  I don’t remember the exact date, but I do remember the moment I received my first sign from GOD.  It’s a moment that I believe everyone remembers because it is an awakening on the inside of you.  A feeling of pure peace, love, astonishment, and a life-altering moment!  My boys were three and four years of age at the time and I was going through a very difficult time in my life.  My marriage was in turmoil.  My husband, at the time, was very controlling and at times verbally and mentally abusive to me and our boys.  One day sitting in my office depressed, distraught and simply not able to concentrate on anything, I had mindlessly dropped onto a sticky pad a drop or two of whiteout and folded the paper in half.  My mind was everywhere, thinking what should I do?  What can I do to make a difference? Would we be better off without him in our lives?  Or, do I take a leap of faith for the sake of all of us?  It was then that I opened this piece of paper and saw a cross appear in the seam where I had dropped the whiteout.  I was simply amazed.  Was this a sign from GOD?  I knew it had to be; because, when I held that piece of paper up to the light, I could see the figure of Jesus on that cross.  He paid for our sins so that we can live on.  I was immediately overcome with peace knowing that GOD was in control and from that point forward, I believed everything happens for a reason and I took one day at a time doing what I needed to do for my children and myself."