Gus and the Lightning

Today I have a guest post on my blog, written by my daughter Lexcie. Welcome, Lexcie, and thanks for posting! 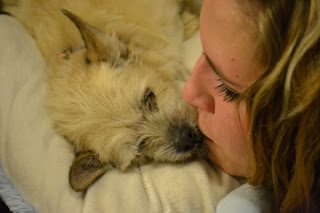 As it starts to rain down from the sky softly, my dog Gus starts to shake. If you didn’t know any better you’d think something was actually wrong with him. It’s only lightly sprinkling, but for Gus, there might as well be a tsunami outside. I call him to me and he almost falls off the couch multiple times to get to me. Now I know he’s really terrified because Gus never just comes over to me willingly. I laugh and hold him tight because that makes him feel more secure. However, as soon as my sister comes in the room, Gus decides she’s more secure and scurries away from me to her. I shrug it off because that’s always how Gus has been.


It starts to rain harder and I can start to hear the thunder rumbling. Oh, this is not good. Gus then starts to whimper softly and shake like he’s having a seizure. He starts panting as if he hasn’t had water in days and has been trapped in the desert. My sister holds him tighter, but there’s no comforting him now. We decide to go outside because we want to see the lightening, and of course have to take him with us. As you can imagine, Gus did not appreciate this at all. No matter how tightly we wrapped him up in a blanket and held him, he continued to tremble.
We try to talk to him and distract him, but nothing is working. You can see him quaking just by watching him; you don’t even have to touch him to see how hard he’s shuddering. We decide to just let him inside and go crazy and deal with it however he wants to. We also let my other dog, Lily, inside with him, even though she’s completely fine. She probably thinks he’s an idiot for the way he’s reacting, if anything. We decide to stay outside to listen to the thunder and watch the lightning. It’s pouring cats and dogs now. Pun intended, just for Gus.
After about an hour outside, we decide we’ve had enough and go inside. At first, I’m not sure where Gus is and I’m a little concerned. However, Gus soon emerges from under the table behind the couch; I didn’t even know he could fit back there. I quickly scoop him up in my arms, but he’s still a quivering mess. As the sound of the thunder gets closer, Gus has now resorted to running around. He just has no idea how to deal with his fears, and it’s too amusing to us to try to even comfort him anymore.
It doesn’t matter how light or hard it’s raining outside, Gus will always get panicked. For the rest of the night, he runs around and wheezes, even though we try to give him water several times. After a couple hours, the rain has died down some. He always does the same thing after a rainstorm because he just wears himself out and he’s exhausted. Gus finally stretches out on his favorite red blanket, and proceeds to pass out.
Posted by Cindy C Bennett at 4:00 AM