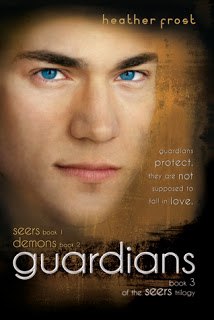 A vision of Kate's death causes Patrick to intensify his duties as Guardian. The Demon Lord is especially relentless now that Kate is the only Seer to ever escape his grasp. When Patrick discovers that Kate is the key to defeating their greatest enemy, he must choose between sacrificing the girl he loves or letting the Demon Lord win. You won't be able to put this final installment in the Seers trilogy down.


Guardians is a more than satisfying ending to Heather Frost's Seers trilogy. Packed with suspense, action, emotion, romance, and plenty of heart rending moments, fans of the previous books will be thrilled by this exciting ending to Kate and Patrick's story.

As in the previous books, Seers and Demons, Heather takes the time to flesh out all of the characters, both primary and secondary, making sure they aren’t cardboard cut-out characters. Patrick is as hot and sexy as ever, Kate is even more courageous and selfless, and their romance kept me turning the pages as much as the suspense of knowing what was going to happen next. The alternating POV’s is a great tool for giving the reader insight into both of their minds to see why they make the decisions they do.

As in the previous two books, Heather does a great job of setting up a conflict, and then giving an ending that’s completely unexpected. She throws in twists and turns that I didn’t see coming, including characters making choices and sacrifices in ways that are interesting, intriguing, and sometimes heartbreaking.

Guardians is everything I hoped it would be, brilliantly satisfying this fan. The only fault I can find with it is that the book inevitably ended. I can’t say enough good about this entire series. I highly recommend it to everyone who loves a good read.

Heather was kind enough to do a little Q&A with me.

Thanks for joining us today, Heather. We’re happy to have you here for the blog tour for the final installment in your Seers series, Guardians. Do you want to tell us a little about yourself?

Thanks for having me, Cindy!  I’m a 23 year old book fanatic and movie addict, living in Logan, Utah. I work some odd jobs that actually pay the bills, and then I write because it’s my passion. I’ve got a terrible weakness for an enchanting story, and I firmly believe that the key to any successful story is the emotional connection between the reader and the characters. I also spend a lot of time visiting my family. I’ve got six brothers and three sisters, and we’re all really close even though the oldest is 25 and the youngest is 7. I also have the most adorable nephew, and two sisters-in-law. Brownies beat cake, Vanilla beats chocolate—unless its Cailler milk chocolate, from Switzerland, in which case I’ll gladly take both.

You just returned from a trip to Europe. Tell us a little about what that was like, and did you get ideas for new stories?

It was an incredible three weeks! I spent time exploring my dream destinations: Ireland, England, Scotland; and I discovered new places I’d never really been passionate about before: Wales, France, Switzerland (Cailler chocolate!), and Italy. The tour I went on (with my cousin) was pretty fast paced, but allowed me to feel unrushed at most places. (I could have spent longer at almost every castle we visited, ruined or otherwise!) I also made many new friends from all over the world: Australia, New Zealand, South Africa, Canada, and the States, most notably.

Story ideas? Definitely! It makes me a bit sad that I promised myself beforehand to finish some of my other projects first, but since I love them too I got over the feeling pretty quickly. But Europe is a great place to go if you want to ignite the imagination.

You wrote all three books in the series in a single summer. That’s amazing. Tell us about your inspiration for the stories.

It was a crazy summer—I didn’t see much sun. But it was an exhilarating experience, becoming so completely invested in my characters for weeks straight. The inspiration story is a funny one, because I guess it shows how my brain works. I was making a ham sandwich at the time, watching a movie, contemplating to myself how I was actually going to be productive this summer, and that I wasn’t off to a stellar start—and then all of these little tangents I’d logged away for the past year suddenly collided, and the subsequent explosion in my mind became the Seers Trilogy. The concept of Guardians, Demons, and Seers (in that order) came to be, then the characters were born, and the plot followed very soon after. I ate my sandwich, walked over to my computer, and rarely strayed for the rest of the summer.

Did you have an outline, or did you just start writing and let the stories go where they may?

I sat down and started typing with a few plot twists in mind, some foggy idea that this story would span three books, and a deep love for my characters. I never make a detailed outline—they just end up ignored, so why bother? I will occasionally make a list of the next 5-10 major plot developments, but that’s as structured as I get.

Having just graduated from college, do you see yourself continuing to write, and if so, do you see it as a career?

I got my Bachelor of Science (English, Creative Writing Major, and Folklore Minor) from Utah State University. I would love to make writing my career, and I’m taking steps in that direction right now. Fingers crossed! But even if writing doesn’t work out as a career, I’ll continue to write. There’s really no way I could stop.

Do you have advice for others who dream of being an author?

I’m going to give the advice that I would have wanted most to hear when I first tried to get published: Believe it’s possible. I mean, dreams can seem pretty unreachable, often downright unrealistic. But anything you believe in becomes possible, because with the belief becomes a determination that will keep pushing you forward, no matter the obstacles.

What are some of your favorite books? Are there any books you read repeatedly?

One random fact about yourself that will surprise your readers:

My favorite days are rainy days.  (The whole living in a desert thing gives some people the wrong idea, I know, but it’s the truth!)

Where can your readers stalk you?
I make it fairly easy. J
Website   *   GoodreadsBlog/Page   *   The SeersFanpage
Find Guardians (and my other books) with the links below:
Amazon * Barnes and Noble * Books and Things 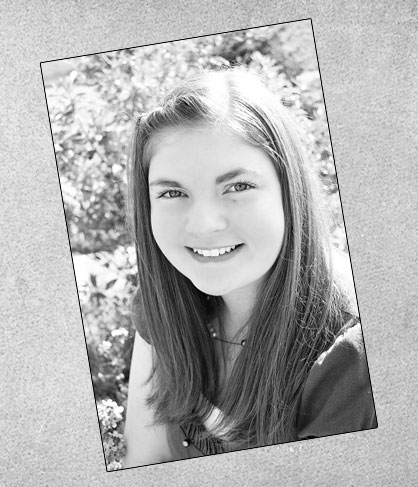 Heather Frost: About the Author
I was born in Sandy, Utah, a few days before Halloween in 1989. I lived in Salt Lake City until I was about six, and then I moved North and settled into the place I still call home. I'm the oldest daughter and second oldest child in my family. I have six brothers, and three sisters. My parents chose to home-school all of us, and I'm surprised that they held onto their sanity after having us home so much. Still, I'm very grateful to them for all of the many sacrifices they made which enabled me to get the education that I did. My family members are my best friends, and I love them all so much. The three most important things in my life are as follows: God, my family, and writing. These things make me who I am, and I will always be grateful to my Heavenly Father for blessing me with so much.

I can't remember a time when I didn't enjoy reading, and I did a lot of it. I also dabbled in writing when I was young, though nothing serious until I entered the teenage years. I picked up one of my favorite hobbies when I started playing the flute at age eleven. I played my flute through High School, participating in both marching and concert bands, which led me to make some very good friends. I continue to play the flute, and was even a member of the Snow College Flute Choir.

I attended Snow College, and there got the best job ever as a writing tutor. I graduated in May 2011 with my Associate of Science, and am currently pursuing a Bachelor of Science as an English Major. (Yes, a BS in English. Almost ironic, huh?) I love movies, music, and books—although I do think that the dumbest question on the planet is the whole “What's your favorite book/music/movie?” The best answer I've come up with is, “Whatever I'm reading, listening to, or watching at the time.” Generally, it's an accurate answer.
Posted by Unknown at 12:00 PM