Now or Never by Jamie Canosa 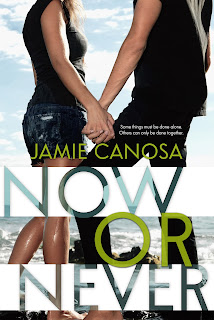 To move on, leave the past behind, and build a new life with Jay.

That’s all Em wanted. After everything they’d been through together, they were both overdue their ‘happily ever after’. Too bad the world doesn’t work that way. Memories last longer than dreams and Em’s fears continue to plague her both day and night, interfering with that new life she so desperately craves.

To start over, secure a future, and give Em the life she deserves.

That was Jay’s plan, but the past isn’t done with them, yet. While Em still struggles to overcome the ghosts of her past, Jay is forced to come face to face with his. When the skeletons in his closet step back into the light, Jay must decide what he will do—and what he will sacrifice—to protect Em from them.

Against all odds, Em and Jay are on the verge of having everything they’ve ever wanted. They’ve fought for it before, but is their love strong enough to endure any more heartache? The time has come for each of them to choose for themselves whether or not they will allow the past to continue to corrupt their future. And, together, they must decide, will it be . . . NOW OR NEVER?

My thoughts: As most people know by now, I'm a fan of Jamie Canosa. Two of my all-time favorite books are Dissidence and Our Own Worst Enemies, both by Jamie. She has a real knack for writing characters that stay with you, and Em and Jay are no exceptions. It isn't often that I like a sequel better than the original (though it does happen, and seems to happen a lot with Jamie's books) and in the case of Now or Never Jamie has taken the story she began with Fight or Flight and made it that much more intriguing. They might be off the streets but that doesn't mean life has gotten easy for these two. Jay and Em are sympathetic and admirable, and their love story can make even the Grinch's heart beat faster. I absolutely recommend this or any other book by Jamie Canosa.

Jamie Canosa is a full time author of YA literature, which she absolutely loves. When she’s not writing or spending time with her family, she can usually be found with her nose in a book. She currently resides in Ravena, NY with her wonderful husband and three crazy kids . . . plus the dog, the bird and the rabbit.
Posted by Cindy C Bennett at 1:00 AM