Hosted by Fire and Ice

Thanks to C.J. Hill, AKA Janette Rallison, for stopping by today on her blog tour celebrating the release of her newest novel, Slayers. She was nice enough to write a guest post chronicling her particular mode of research, which I have to say goes above and beyond! Make sure to check out the blurb and excerpt below that.

Researching the action novel—and you thought writers just sat at their desks.

I do a ton of research for every book I write. Seriously, I’ve had to research how many times a fly throws up per second when it lands on something. (I bet you didn’t know that’s what flies were doing while they walked around your kitchen counter.) I’ve also researched obscure details in ancient Egypt (Did you know that Ramses the Great was a redhead?) The Middle Ages—I’ve read 20 books on the subject and I’m still trying to find out what exactly what a priest said when he married a couple. Each book teaches me something new and sends me researching in a new direction.

Slayers: Friends and Traitors had its own set of researching challenges. In one scene the Slayers have a showdown with the dragon lord’s men, so I researched night vision goggles, flashbangs, different types of guns, ammo, and body armor. Tori is in the White House at a presidential party when she finds out the dragon eggs have hatched, so I also had to research the White House blueprints. Yeah, I’m probably on the FBI’s watch list now. 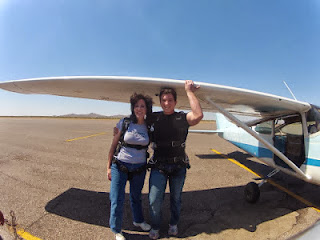 Probably the most memorable thing I researched for Slayers: Friends and Traitors was skydiving. In one scene, the Slayers jump out of plane. The best way to do research is to actually do the activity you’re writing about, so I scheduled a skydiving trip.

I didn’t think it would be too frightening since large numbers of people skydive every year. I figured, hey, people pay a lot of money to skydive so it’s probably even fun.

That was my first stupid assumption. People are idiots and you should never do something just because a lot of people pay large amounts of money to do it. Case in point: golf. (Just kidding, golf fans.)

I booked an appointment, went to the airport, and signed the twelve page waiver that detailed all the hideous ways I might die.

Basically it said I might be struck by passing aircraft, hit by vehicles on the ground, or may run into trees, buildings, or poisonous snakes. I still wasn’t all that nervous because I knew I was going to be strapped to an experienced instructor. He was not likely to skimp on parachute inspection or whatever, because he didn’t want to die any more than I did.

Then I met my instructor. He was a twenty-three year old guy who I suspect had no sense of 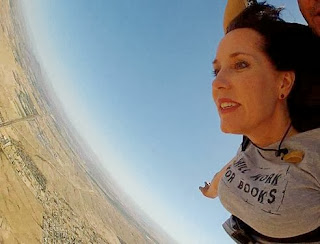 his own mortality. I became a little nervous.

He took me to a small plane that sounded like a lawn mower and seemed to be held together with duct tape, super glue, and erector set pieces. I was a little more nervous, but I was still okay because I figured the pilot had been flying the plane for quite some time so he had a lot of experience doing important things, like not dying.

We took off, gained altitude, and putted around in the sky for several minutes. I was now more nervous and cursing myself for ever switching from writing romantic comedies to action novels. Really, when you come right down to it, it would be fine to write a book about boring people who never do anything dangerous.

And then the plane door opened. At that point a spike of terror hit me. I realized that people are born with several strong survival instincts and one of them screams: DO NOT JUMP OUT OF A PLANE! IT WILL KILL YOU!

I said many things at that point, all of which my twenty-three year old instructor ignored as he dragged me out of the plane.

And then we were falling through the sky. After the terror wore off, it was fun.

When you all read the skydiving scene in Slayers: Friends and Traitors, I hope you appreciate my diligent research.

The Slayers – teens who have powers to fight dragons—are back by popular demand in this high-octane sequel, now with a new cover package!
Tori is at a White House dinner party when she hears a horrifying sound: dragon eggs hatching. It means in less than a year, the dragons will be mature and dangerous. The Slayers are well-trained, but their group is not yet complete, and Tori is determined to track down Ryker Davis, the mysterious Slayer who has yet to surface.What Tori doesn’t bargain for, however, is the surprising truth about her powers: she isn’t a Slayer after all, but a Dragon Lord, with a built-in predisposition to protect dragons, not kill them.
How will she overcome this to save the lives of her friends? 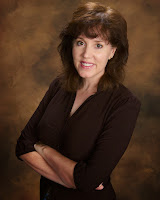 Author Bio: CJ Hill is a pen name for a YA author who is best known for writing romantic comedies. (Slayers will be her 18th published book.) Her writing has shifted away from the romantic comedy genre, so her editor thought a pen name would be a good idea. (New books will include: dangerous dragons, time travel to dystopian worlds, and flesh-eating beetles.) Since the publisher refused to let her have the pseudonym : The Artist Formerly Referred to as Princess, she chose a name to honor her mother. CJ Hill was her mother's pen name, or at least it would have been if her mother had published. Her mother wrote a few children's books and a middle grade novel but was taken by cancer before she had fully learned the craft.
(Most writers' first novels aren't publishable. CJ Junior's first novel wasn't, but somehow was published anyway. Now, even though it is out of print, it remains forever available on Amazon, where it taunts her with its badness. This was another good reason to use a pen name.)
CJ Hill has five children, three of whom like her on any given day depending on who is in trouble. She has lived in Arizona for the last half of her life, but is still in desert denial and hopes that one day her garden will grow silver bells and cockle shells or maybe just tomatoes