I signed up to be part of The Dystopian Tour from Prism Books. I don't know anything about the books on the tour, but I'm always happy to help out a fellow author in getting word out about their books. So for today, I'm highlighting a pair of books by Nicole Ciacchella, who is graciously co-hosting two giveaways that can be found at the bottom of the page. 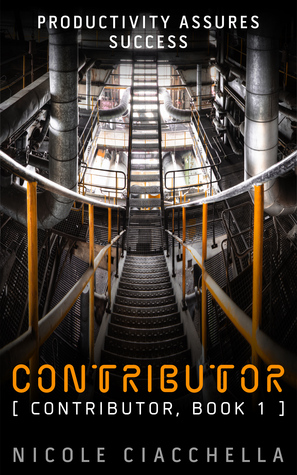 When the Great Famine threatened the existence of mankind, the Creators saved humanity. Humanity has been their loyal subject ever since.

This history has been ingrained in seventeen-year-old Dara Morrow since her first day of Creator-sponsored school. Grateful for the life-giving necessities her Creator provides, Dara is thrilled to be one of three students chosen for an elite, year-long apprenticeship program. Now is her chance to prove herself a devoted Contributor.

But Dara’s competition is ruthless and will stop at nothing to win the competition. Worse yet, her exacting master has little patience for her.

Then Dara’s mother is seriously injured, and Dara realizes the price of being a Contributor: once you’ve outlived your usefulness, you’re discarded. Can Dara learn to manipulate the system to save not only herself, but everyone she loves?

“I’ll try to be as gentle as possible, but this is going to hurt,” Dara warned Letizia as she shone the light on her bag, digging through its contents. She found a sterile wipe, some gauze, and some tape. It would have to do until Letizia could receive professional medical care.

As gingerly as she could, Dara cleaned the wound. Letizia sucked in a breath, and Dara bit her lip. If she’d had both hands free, she probably could have been a lot gentler about it. But that would have forced her to put the light in her mouth, which would have rendered her unable to conceal its beam.

When she finished cleaning, Dara swiped her forearm over her eyes. Letizia still had a lot of blood crusted in her hair, but now was not the time to worry about it. Awkwardly, Dara covered the wound with gauze and taped it down as securely as she could. She looked around for a second, trying to figure out what to do with the bloody wipe and the gauze wrapper.

What the hell, Dara? This isn’t the dome. You’re not going to find a conveniently located trash chute. Just drop the garbage on the ground.

Letting out a shaky breath, Dara flicked the light off. She groped through the bag until she felt the contours of a water bottle, and she uncapped it and handed it to Letizia, before searching for the second.

“You have to take at least a few sips. Becoming dehydrated will make things worse. Here, I’ll help you.” Dara set her bottle aside and took Letizia’s. She managed to coax Letizia to take two small sips before her master gagged, spilling the contents of her stomach over the dry, crusted earth.

Now Dara was very worried. She suspected Letizia had a concussion in addition to her head wound. The adrenaline from their flight away from the transport began to wear off, and Dara could feel panic setting in.

“Do you have any idea how stupid it is to use a light out here?” a low voice growled. 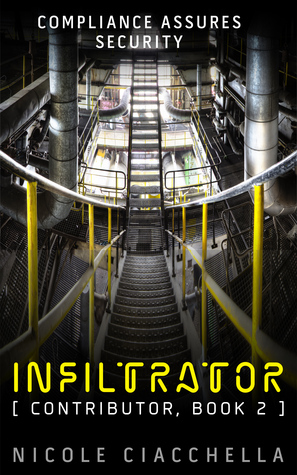 Surviving her apprenticeship was just the first step. Now that Dara has joined the Free Thinkers, her life is about to become much more dangerous.

Frustrated by her seemingly pointless efforts to prove her worth to the Free Thinkers, she wonders if she made the right choice. Yet she can’t go back to her old life, can’t forgive Magnum for what it did to her mother. Then she discovers a crucial piece of intelligence: Andersen has been hard at work on a clandestine project that’s caught the attention of the Creators.

At last Dara is made a Free Thinker operative, trained and taught the truth about the Great Famine and its aftermath, but she must conceal her knowledge at all cost. Andersen must believe she’s no more than the sacrificial lamb he thinks she is.

But as the Creators’ interest in the project deepens, Dara is placed under surveillance and cut off from her Free Thinker lifeline. When she makes one last, desperate attempt at exposing his secret project, the repercussions are enormous.

Born and raised in Michigan, Nicole lives there still with her husband and two wonderful children. When she's not writing, Nicole enjoys reading, gaming, traveling, and cooking.

One of the things that consistently surprises me when I write is how fond I grow of some characters, especially when they start out as little more than a nebulous concept. Contributor is no exception. When I was peopling the world, I thought a lot about Dara, her parents, her boyfriend, Jonathan, and her mentor, Letizia. I certainly gave consideration to the other characters as well, but this was the core group I focused on, and so imagine my surprise when I developed a major attachment to a couple of the characters I thought would just be minor players.

The first is Javier Gutierrez, one of Dara’s rivals for the position of Assistant to the Head of Engineering. I pictured Dara’s competition as ruthless, and Javier isn’t afraid to do whatever it takes to come out on top, but I hadn’t thought he’d be particularly likable. Yet as I wrote Javier I became increasingly fond of him. I loved his blasé attitude and how it concealed depths. I liked how he had a knack for cracking wise because, well, I have a certain weakness for characters with a bit of an attitude. Over time I became convinced that his motivation, unlike Ryan LeTour’s, wasn’t to destroy Dara but to ensure his own survival. Javier, like Dara, is a victim of his circumstances. If Javier were in a different situation, his actions would have been different. This led him to develop unanticipated shades, and in book two, Infiltrator, it becomes clear what motivates Javier. It wasn’t planned, but I began to see how he and Dara were parallel characters in many ways, and how their common struggle helped unite them. I was thrilled when I started drafting book three because I knew Javier had more of a role to play, and I was excited to be able to devote more page time to him.

Of course, he’s not the only character who surprised me. Raj Tiwari did as well, and I’m not afraid to confess that, yes, I do happen to fall for my own literary creations. I have a massive crush on Raj. He has an excellent sense of humor as well as being sweet, considerate, brave, and in book three he also gets to develop all kinds of new facets, which made writing about him both harrowing and a real pleasure. He plays an important supporting role in the first two books, becoming one of the few people on whom Dara feels she can depend, but he really comes into his own in book three. I don’t want to give away too much about his story, but I will offer up this hint: one of my favorite types of literary characters are those who feel they must atone for something. Redemption stories are very compelling to me, and Raj has his personal demons to battle, which made me feel very protective of him. Sorry, Javier. I adore you, but Raj has a special piece of my heart.

So there, dear readers, I have made a confession to you: I do have my favorites. All of my characters mean something to me, but there are those that I find so irresistible I just can’t help myself.