A few months ago I ran across a post advertising a writing contest for vampire stories for Noble Young Adult. I read it and then immediately dismissed it. I mean, I don't write vampire stories, so it didn't seem to be for me. But the idea had stuck in my mind. And so, I tracked the post down again and reread it. And then thought, what the heck, the worst they can do is say no. Actually, the worst they could have done was to laugh in my face, but since it was all to be handled virtually, I figured I'd never hear the laughter.

Just for fun, I decided to write a story and enter it. Okay, it wasn't just for fun. I decided it would be a great way to stretch my imagination and creativity, to see if I could, as a writer, step outside my normal genre and write something vaguely interesting. Imagine my surprise when I opened the email and read they'd chosen my short story, Reluctance, as one of the winners to be included in the vampire anthology Young Immortals.

Moral of the story? Don't ever assume you can't do something without even trying. You never know just exactly what you may be capable of.

Reluctance is about a girl named Dahlia who moves to a new town. Working at the local hospital while attending college, she meets two guys: Jace and Cam. Both are as different as night and day. She sets her sights on Jace, but begins to fall for Cam. However, things aren't always what they seem - people aren't always what they seem. Who knew that a monster moved among them?

Below is the beautiful, amazing cover created by the talented CH Scarlett. As soon as I know a release date, I'll update you here. 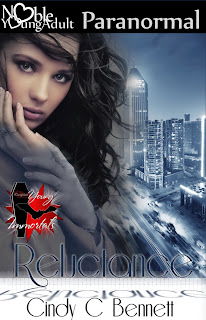